In this new episode of the ITM Podcast, our research assistant Justin Rennert talks to Coco Aro about Armenian copyright law. Coco, a high school student from Münster, has been doing a student internship at the ITM for the past two weeks. He has Armenian roots and speaks the Armenian language. For this reason, he set himself the goal for his time at the ITM of comparing Armenian copyright law with German copyright law. The results of his extensive research and a short internship report can be found in the new episode of the ITM podcast. We say: Hats off to this achievement! This was a student internship on a very high level. A short summary of the podcast in Armenian can be found from minute 19:50 onwards. Coco plans to study law after his Abitur. The internship at ITM has confirmed his wish. We are looking forward to possibly welcoming Coco as a staff member at our institute in the not too distant future.

The exchange of data between science and business is becoming increasingly important. For this reason, the FAIR-Data Spaces project funded by the Federal Ministry of Education and Research is creating a common cloud-based data space. The data exchange is to comply with the so-called FAIR principles, according to which data must be findable, accessible, interoperable and reusable.
The responsible ITM staff members Julian Große-Ophoff, Klaus Palenberg and Max Husmann are assessing the protection of industrial and research data under intellectual property law. In addition, codes of conduct are drafted and existing compliance regulations are reviewed in the light of copyright, secrecy and patent law.

On 18 January 2022, Dr Anselm Rodenhausen, Head of Antitrust & Distribution Law within the legal department of Zalando, gave a one-hour zoom lecture on the topic of “Challenges for online platforms”.

Dr Rodenhausen has dealt with competition law in the digital sector in various positions over the last ten years: During his time as a lawyer in the Brussels office of Freshfields, he advised international tech companies. As Legal & Policy Officer at the European Commission (DG CONNECT), he was involved in the development of the EU strategy for the Digital Single Market. At the ITM, Dr Rodenhausen completed his doctorate on a media competition law topic and a Master’s degree at Oxford University.

In the first part of the lecture, Dr Rodenhausen went into the special features of digital markets. On the one hand, these differ from conventional markets by their size: the physical proximity to the customer becomes relative. On the other hand, digital markets are characterised by their network effects and scalability.

Finally, Dr. Rodenhausen took a “deep dive” into the national and European legal framework for online platforms. In doing so, he saw Germany as a “trendsetter” in this area, which had adopted innovative regulations, for example, with the NetzDG and Section 19a GWB. The recent finding by the Federal Cartel Office that Google is of “overriding importance for competition across markets” within the meaning of Section 19a (1) GWB shows the effectiveness of the new provision. At the European level, too, the Digital Markets Act is a set of rules for the regulation of online platforms. In the area of data sharing, a reform project of the Vertical Block Exemption Regulation and Vertical Guidelines with detailed regulations is planned at European level for 2022. Dr Rodenhausen also referred to the less detailed German Section 32c (4) GWB n.F., which, however, provides for an important right to an official decision.

We sincerely thank Dr Rodenhausen for the exciting and instructive lecture!

Sorry, this entry is only available in German.

Sorry, this entry is only available in German.

The ITM is pleased to announce that Prof. Dr. Thomas Hoeren, together with Prof. Dr. Nikolaus Forgó from Vienna, will be able to organise a seminar on “Comparison between German and Austrian Internet Law” in the coming summer semester. The seminar is to take place in Vienna – the Corona pandemic permitting. The binding preliminary meeting with topic allocation will take place virtually via Zoom on Monday, 10 January 2022, at 17:00. If you would like to participate in the seminar, attendance at the preliminary meeting is mandatory. Please refer to the linked document for the dial-in dates and further information on the schedule as well as the topics:

If you are interested, we would appreciate it if you would send a short e-mail (hoeren@uni-muenster.de) to Prof. Hoeren beforehand. Then better planning is possible.

On 3 and 4 December 2021, the annual doctoral seminar took place at ITM. Under the direction of Professor Dr Thomas Hoeren, around 20 doctoral students and PhD candidates discussed selected research projects from the field of ITM, from industrial property rights and copyright law to advertising and data protection law as well as legal tech. The basic concepts of correct research in scientific theory, the basic structure of a doctorate and the formalities of the dissertation were explained. Exciting individual issues were discussed in depth, such as the limits of the right to information under data protection law, copyright law in South Africa and patent law issues in genome analysis. In addition, there were individual discussions in which the individual procedures were discussed in detail.

The annual ITM table football tournament took place under 2G+ conditions. Eight teams competed with very different goals. While some were striving for eternal glory, others used Pierre de Coubertin’s Olympic motto: “Taking part is more important than winning. Nevertheless, a winning team was certainly determined in the end. In a gripping final match, Nicolas and Max came out on top. While Max scored from behind every now and then with powerful long-distance shots, Nicolas shone as a filigree striker. The congenial duo, who have already won several ITM quizzes, had the upper hand in the final over Nele and Nico, who had also catapulted themselves into the final with their brilliant performances.

The winners of the surprise prize were Klaus & Hubsi. The two data experts – just like Nicolas and Max – can look forward to a nice surprise in due course. And looking forward to the year 2022 is also the keyword. The next edition of the “ITM Campuskickern” is planned for the summer. Hopefully in a more relaxed atmosphere and with a barbecue afterwards.

Many thanks to all participants – we are already looking forward to the next tournament!

Yesterday (20 November) in Beijing (China), Professor Dr. Thomas Hoeren gave a highly acclaimed short video lecture on the perspectives of Art law in university education. The event was attended by 142 professors, students and government representatives from all over China. The conference was chaired by Professor Dr. Zhou Lin (Beijing), who has been a friend of the Institute for many years.

The video can be found here 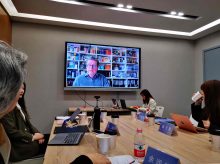 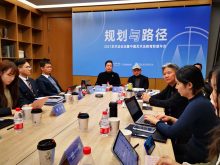 At the beginning of the meeting, Institute Director Prof. Dr. Thomas Hoeren gave an overview of the current developments in the civil law department of the ITM. This was followed by presentations on a wide range of topics by both former and current ITM staff members.

Over a midday snack, the alumni exchanged ideas with each other and with the Institute’s current staff.

During the afternoon programme, the participants devoted themselves to the fine arts with a visit to the LWL Museum of Art and Culture. Over coffee and cake at Café Lux, the day came to an end and current experiences and anecdotes about their time at the ITM were exchanged.

The alumni reunion takes place every year in November. You can find more information about the Friends here.