In a new episode of the J!Cast, Marten Tiessen and Owen Mc Grath, research assistants, talk about the implementation of the DSM Directive (short for Directive on Copyright in the Digital Single Market) by the German legislator.

In addition to the new introduction of the Copyright Service Providers Act, the changes to the Collecting Societies Act and the Copyright Act will also be discussed.

For an overview of the DSM Directive and the controversial Article 17, we are happy to recommend a 2019 J!Cast by Marten Tiessen and Nico Gielen.

Furthermore, a detailed article by Justin Rennert on the implementation of the DSM Directive can be found in the current DFN-Infobrief Recht.

At the beginning of the lecture, Professor Dr. Guggenberger explained the background to U.S. copyright law by presenting the anchoring in the U.S. Constitution in Section 8, the purpose of copyright in U.S. law, the historical development based on the Copyright Act of 1790, and various theories on the necessity of copyright protection. Subsequently, the requirements for protection (quality requirement, independent creation, certain degree of creativity) as well as the specific requirements for the individual criteria of 17th U.S. Code § 102a) were presented. Professor Dr. Guggenberger explained the minimum requirements for a certain degree of creativity on the basis of the case Feist Publications, Inc. v. Rural Telephone Service Co, 1991, in which the court denied a telephone directory the minimum requirement of creativity and thus protectability under 17 U.S. Code § 102a). Professor Dr. Guggenberger illustrated the list of works enumerated there, but not an exhaustive list, with current examples for the eager students and then showed the distinction between an idea and an expression under 17th U.S. Code § 102b). Furthermore, the special case of “work for hire” was discussed, where the copyright arises directly with the employer or with a client.
Subsequently, another significant difference between the German and the American legal system was presented: the legal provision “fair use” under 17th U.S. Code § 107, according to which copyrighted material may be re-used without the permission of the copyright owner under certain circumstances. The individual criteria for verifying fair use were presented and the individual requirements were explained in more detail using example cases. Professor Dr. Guggenberger concluded the lecture with the most recent copyright case, Google vs. Oracle (2020), by presenting the Supreme Court decision and its reasoning with regard to fair use.

We would like to thank Professor Dr. Guggenberger for the great and informative lecture.

The ITM is pleased to announce that Lars Rieck, an advocate from Hamburg, has been elected as a new member of the ITM’s scientific advisory board. Mr Rieck has been a lawyer in Hamburg since 2004; he is both a specialist lawyer for industrial property rights and a specialist lawyer for copyright. He is active as a lecturer in various institutions and represents the German tattoo scene. He is particularly active in the field of tattoo and copyright law and can already refer to a wealth of publications in this area. In the past, Mr Rieck has supported the work of the ITM with great goodwill. The directors of the ITM, Professor Hoeren and Professor Holznagel, are looking forward to working with him in the future.

In this podcast, Owen Mc Grath and Nico Gielen talk about the Clearing House for Copyright on the Internet (CUII), which has been providing an out-of-court procedure for the establishment of network blocks for a few months now.

You can find a detailed article on the CUII in the July issue of DFN-Infobrief Recht.

The time has finally come: The joint work of PROvendis GmbH and the ITM on the IP Driving Licence – E-Learning on Intellectual Property (IP) will be completed in the next few weeks. The IP Driving Licence, which consists of the modules Patent Law and Copyright Law, will go online in autumn this year. There will be an online presentation via Zoom on 22 September 2021, 10:00 – 11:30.
We would like to cordially invite you all to this event. You can register via the website of our partner PROvendis here.

On June 28, 2021, Professor Toshiyuki Kono, professor at Kyushu University in Fukuoka, Japan, gave a 90-minute lecture on the topic of conflict of laws issues in copyright law as part of Professor Dr. Thomas Hoeren’s copyright lecture.

END_OF_DOCUMENT_TOKEN_TO_BE_REPLACED

On 28 July 2021, Prof. Dr. Dr. Frauke Rostalski gave a lecture on the use of new technologies in the determination of law, which was attended by the project partners of the GOAL project and many other interested ITM staff members. Prof. Rostalski holds the Chair of Criminal Law, Criminal Procedure Law, Philosophy of Law and Comparative Law at the University of Cologne, is a member of the German Ethics Council and heads a research project on AI certification. She is also involved with the Law and Ethics of Digital Transformation Research Unit at the University of Cologne.

During her lecture, Prof. Rostalski presented the opportunities and risks of the use of AI in substantive law-making and illustrated them with potential future scenarios.

Following the lecture, Prof. Rostalski and the participants exchanged views in an exciting discussion and question and answer session.

Finally, Prof. Rostalski presented the current AI certification project of the KI.NRW competence platform, in which she is responsible for the entire area of “law” (https://rostalski.jura.uni-koeln.de/forschungsprojekte/ki-zertifizierung). The aim of the research project is to use certification for AI applications to ensure technical reliability and responsible use of the technology.

We would like to take this opportunity to thank Prof. Rostalski for the great lecture and all participants for their good contributions.

A recording of the lecture can be found here.

It has almost become a tradition that the ITM’s scientific staff and student assistants take part in the Leonardo Campus Run.

On 23.06.2021 it was that time again: The team “ITM-Runners” went to the start with 25 runners who ran a total of 182.5 km. Due to the pandemic, there was no official running route. The ITM-Runners therefore arranged to run the respective distances (10, 7.5 and 5 km) in small groups and measured their times themselves. In the evening, they toasted together to their successful achievements outside.

We are already looking forward to next year! 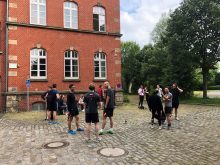 On 21 June 2021, Mr. Christlieb Klages from Berlin and Mr. Thomas Blickwedel from Münster each gave an exciting lecture as part of Professor Dr. Thomas Hoeren’s lecture on copyright law.

For the first three quarters of an hour, Christlieb Klages presented the current problems in music and film law and dealt with film production law (synchronisation right), using an example to illustrate how a musical work can be linked to a film work as a film score. Christlieb Klages also elaborated on the significance and connection of Gema, publisher, composer and pressing plant. Furthermore, the master use licence and with it the importance of sound carrier producer, record company, label, artist and company were presented. This was followed by an interesting round of questions from the students and other interested parties who attended the lecture, which was moderated by Professor Dr. Thomas Hoeren.

The second lecture consisted of a fifteen-minute presentation on Thomas Blickwedel’s doctoral project, which deals with the current problems of the copyright exhaustion principle in times of digitalisation. In the context of this debate, two decisive judgments of the European Court of Justice were presented. In the ruling ECJ, 03.07.2021 – C-128/11, it was decided that used software may be resold, as the copyright exhaustion principle also applies to software acquired by means of a download. In the second judgment presented, ECJ, 19.12.2019 – C-263/18, the European Court of Justice denies the exhaustion effect to used e-books and classifies them as making available to the public. This different legal assessment is accompanied by a dichotomy between software and e-books – and thus also other digital goods – which Thomas Blickwedel critically examined and then proposed solutions as to how the principle of exhaustion could be better adapted to the digital development.

We would like to thank both speakers for their exciting presentations.

On 15 June 2021, the doyen and grand seigneur of the ITM, Professor Dr Hans Kiefner, unfortunately passed away after a serious illness. Professor Kiefner headed the Institute for Canon Law at the University of Münster for decades, where I worked as an assistant and researcher. I owe my academic training to Mr Kiefner, who introduced me with great meticulousness and fatherly care to the primal research on Savigny or early modern canon law history, for example. His thoughtful, calm attitude, his scholarly curiosity and his Swabian liberality left their mark on me. I will always have fond memories of him! Thomas Hoeren